Engineer Techno Behind The Scenes! Part 3 - The video

My first idea was to make a DJ Hero inspired music video for the song, there began the preparations.

I found the perfect map...

gm_rave_final
by Kainy
(If you're downloading it, don't forget the Sound Fix Download)


My first task on the map was to make a turntable with spinning vinyls.
For the vinyls i used a CD model (Download) and re skinned it myself to make it black. 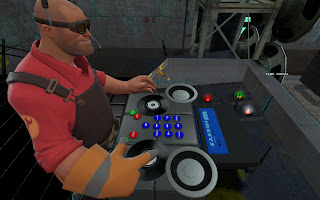 I thought my plan for spinning vinyls was great and easy but it was proven very hard.
My plan was to set the vinyls on a spinning axis on the base, then place the Engys hand also on a spinning axis on the vinyl. Though i found out the placing an axis on a rag-doll hand was hard, also if you accidentally dropped the hand from it's freeze it would break the whole contraption. Another problem was generally to make the vinyl spin good when moving Engys hand, you needed to be exactly right with the movement to not break the physics of the vinyl.
Enough Gmod talk :P

I left that idea and decided that just having them there would be good enough, giving me a plus that i now could resize them too without breaking them.

The rest of the turntable is created by various "wire" buttons and machinery. If you look closely on the video you can see that all the buttons were acting weird during the whole recording. They started floating in nowhere and spinning and turning, something i also could not do anything about :(

Lighting, props and people:
The lights and the dancing combines is what made this recording laggy, it also messed up a lot of ideas since it was so laggy. Movements were not as smooth and easy handed as I've wanted them to be.

I first planned of Female Pyro and Alyx to dance a lot more and more sexy, but the lights made any physgun movement kinda laggy and slow. It ended up with a few clips that i could use.


Then, in true club style, i added the Heavy Bouncer. Of course Heavy became the bouncer, who else? :P


One Mac Headphone (It's the headphone model with "nocolide" and turned inside Heavy so that only one is visible)
A Gun (On his hip, you could not see it in the movie)
and A Stunstick was good enough to make me giggle at my creation :) in a good way.


The dancing combines and zombies...


Yes, as many have commented they are looping the "i'm on fire" animation. Though i did not do much to make them to that. I actually used one of the first swep weapons i ever downloaded to Gmod,
the Raveball by Killburn! (Download)


It's a classic and that swep is what's causing the lazer beems too. Try it out yourself around some combine NPCs and you'll understand (Download)


Other Tricks and facts:

Hope you enjoyed my three part behind the scene, you have been asking for it so long now.
I must give you credit if you have read all these parts now, i hope you've learned something.
Please leave a comment on what you found out reading this, i would really appreciate it :)

Email ThisBlogThis!Share to TwitterShare to FacebookShare to Pinterest
Subjects: Behind the scene

Search in This Blog