Engineer Techno Behind The Scenes! Part 2 - The music

Making the Engineer Techno music:
I can't force an idea out of my head, an idea can come to me at any time, anywhere!
This is a good example of exactly that... My friend CrimsonCombine introduced me to the song Ghost n Stuff a while ago and i loved it! I listened to it constantly and i had a CD in my car with Ghost n Stuff included. And suddenly one day, i just caught myself mumbling "En-gi-neer" to the baseline, and i almost drove into the ditch after shocking myself with that discovery! I listened to the song a few more times and later i upgraded the phrase to "En-gi-neer, tech-no" since me and my friends joked about Engineers "Heck no" response just a few days earlier, it just came to me.

That's the origin!
I found an instrumental version of the song and placed "En-gi-neer, tech-no" in the right position to the instrumental. And from that i began building the song around it. I started this project early this summer and worked with it from time to time parallel with my other projects (like Panic Sniper).
This is how a Vegas timeline can look like after a song like this done by me...
This is the first chorus, the first marker there is when the base kicks in after the Engineers mixed cheer. 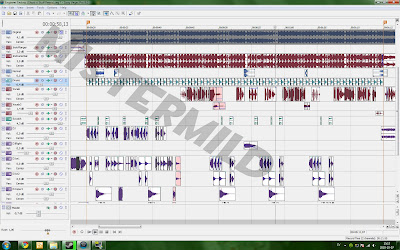 Also there are a few rows more.

I actually finished it over a month ago, but i kept changing it until i did not want to change it anymore.

The scratching:
In my general quest to always try and make something cool that's not very common in Garry's Mod movies, i decided that i should make this song kind of like a DJ mix. Maybe there's someone out there that has made anything containing TF2, scratching and DJ-ing before but i could not find anything greater.

Some people think that's me personally scratching the engineers voice clips, but it's not.
I know a few things about mixing and such but not enough to do it live. So the key is that i used a big load of scratch samples and blended them with the Engis clips in Vegas in a kind of "Fake Scratch".
Sort of simulating the sound that scratching a vinyl back and forth does. 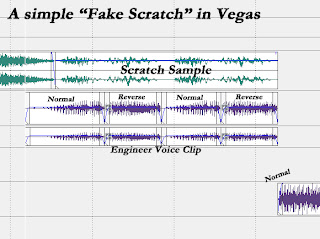 
Hope you enjoyed this second behind the scene segment,
Please leave a comment and tell me what you think.

Email ThisBlogThis!Share to TwitterShare to FacebookShare to Pinterest
Subjects: Behind the scene

Search in This Blog